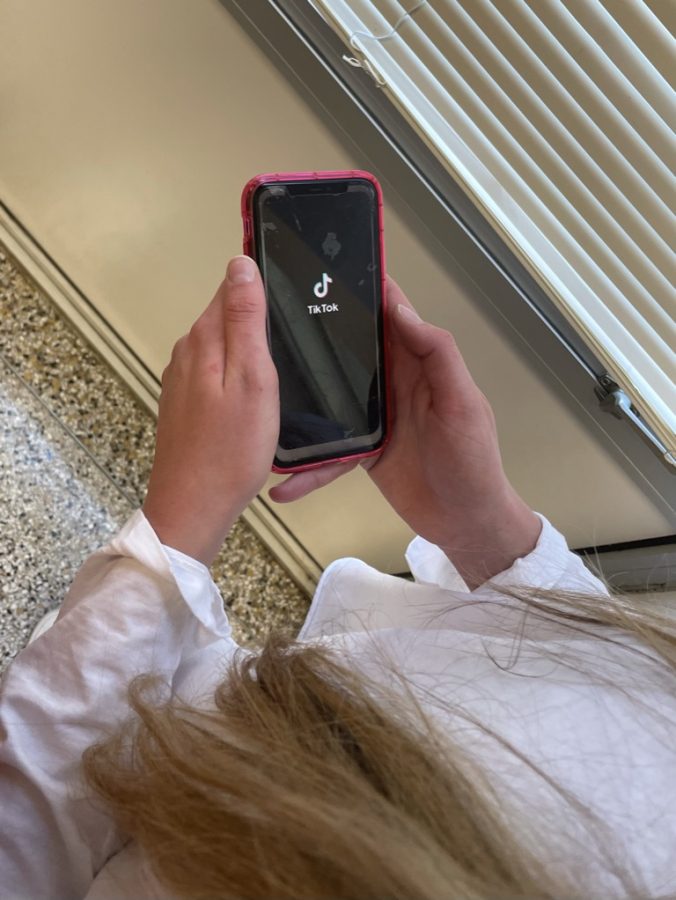 TikTok is a well known app that most are known to be obsessed. Trends run the app, and these are the most recent ones.

Upon hearing the word TikTok, people will likely react in either enthusiasm or outright disgust. No matter one’s opinion about the video-sharing app, it’s always fun to check out the latest “big thing” circulating to stay updated on teen culture. Many trends have been going viral, and here are currently some of the most popular on the platform.
“Berries and Cream” audio remixes
If you’ve been on TikTok any time in the past few weeks, chances are you’ve been unsuspectingly assaulted by the random insertion of the words “little lad” or “berries and cream” into a popular song. This is an example of an audio remix, where well-known sounds are edited to include jarring clips of other comical audios without warning. In 2007, Starburst made a commercial featuring actor Jack Ferver to highlight the release of their new “berries and cream” flavor. Ferver starred as a medieval-looking little boy sporting a bowl cut, singing, “Berries and cream, berries and cream, I’m a little lad who loves berries and cream.” On YouTube, the ad quickly went viral, and in response, an extended version was released. This year, the commercial was recovered from the Internet’s archives due to TikTok’s new obsession with the little lad. Ferver even created a TikTok in character as the little lad to join in on the fun.
“Devious Licks” Challenge
Starting with a simple pack of disposable masks stolen by a teenager from their high school, the “devious licks” challenge has ramped up in popularity to the point where students have started committing felonies just to go viral. In this challenge, one must carry out the most “devious lick” possible. Essentially, a “devious lick” is where a student must steal something specifically from their school. The more high-risk the theft is, the more “devious” the “lick” is. Examples of items stolen include paper towel dispensers and clocks. The more daring have gone so far as to commit what is referred to as a “godforsaken” or “diabolical” lick, lifting things such as printers and desktops. Schools, fed up with the nonsense, have begun cracking down on the fad by taking measures such as installing “steal-proof” paper towel dispensers and more security cameras or even prohibiting the use of some bathrooms on campuses. Hopefully, this trend will die out soon.
Performing “Rick and Morty” by Soulja Boy
Is this the most bizarre of events to fascinate the TikTok community? Quite possibly. When TikToker @theboyraabit01 performed the popular rap song “Rick and Morty” by Soulja Boy at the grave of President Woodrow Wilson, the absurd video received 7 million views and 1 million likes within a week. Other creators quickly caught on, performing the rap to audiences ranging from a Disney World animatronic of Shrek’s Donkey to the entire city of Pompeii.
“I’m a Survivor” Trend
If you’ve ever done anything remotely responsible in your life, this one’s for you. The 2001 country song “I’m A Survivor” by Reba McEntire has become the subject of satirical videos showing the “struggles” of something trivial, like putting a water bottle in the fridge. One of the first videos with this theme was posted in July and featured a woman feeling “like a survivor” after taking out the trash when her husband wasn’t home. Videos range in themes, with the lyrics “A single mom who works two jobs, who loves her kids and never stops, with gentle hands and a heart of a fighter, I’m a survivor” playing in the background. Some examples include “being the friend who drives everyone” or “replacing the toilet paper roll.” The trend became so popular that McEntire herself contributed, along with Jessie actor Kevin Chamberlin. Once again, Gen Z has twisted something with a deeper meaning and made it ironic.
This handful of examples, ranging from the past month or two, proves the versatility of the controversial social media platform. If there’s one thing about using TikTok that everyone can agree on, it’s that you’ll never be bored.