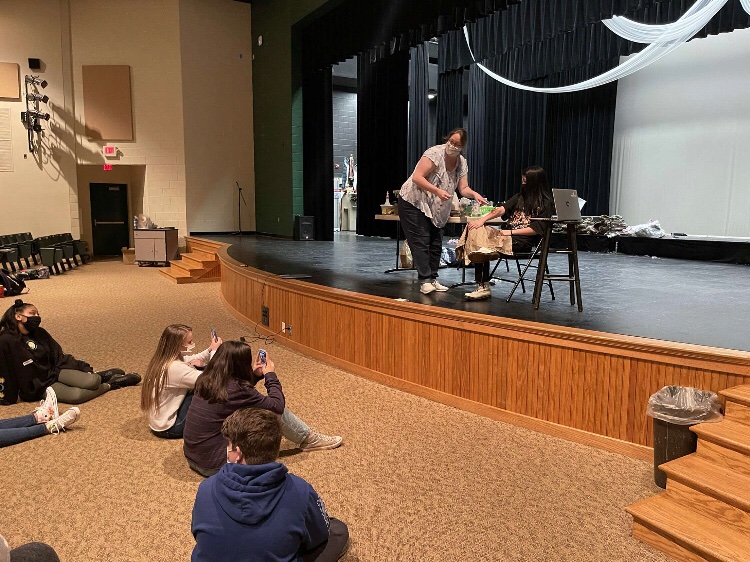 Mrs. Hubbard teaches theatre students from a distance. Students who opted for in-person learning must be masked while on campus.

When WSFCS finally allowed 10th-12th grade students to return to in-person learning for the first time in nearly a year on Feb. 22, sophomore Cate Etchason was particularly excited to be back on campus.
However, with at most two people in each class, Cate didn’t find it as fulfilling as she was hoping.
“I want more people — or more talking time to other students because it gets really boring. I was expecting to go back, and be like, ‘Hey, friends!,’” she continued, “I want more people interactions because it’s just kind of weird… it’s like prison.”
Namely, students are left with limited teacher instruction and arguably more assignments. Cate notes, “The workload is so overwhelming! And I know last year, we weren’t doing this, and even then, if we were still in school, we wouldn’t be doing this much work. Because literally last year at this time, I was getting no work, and I was living my life to the fullest, to the funnest,” Cate said.
Students have been struggling with a lack of motivation, partially due to so much distraction from smartphones or background ongoings at home.
“I get distracted very easily, and I’m not very good at turning my assignments in on time because I tend to get a little lazy, so after class, I just kind of sit there and watch TikTok until my next class, and then I sit there and watch TikTok until my next class, and then it just kind of continues throughout the day,” Cate said.
And, apparently, it’s not much different being at school than it is at home. Either way, you log into Zoom for 50 minutes and then get a 40 minute time period for work.
“It’s just like being at home but in school. I go there, and then they teach on Zoom, and then they tell you to do the asynchronous work, and if you have any questions, and then they just go back to doing their work, and then I put my AirPods in and just watch TikToks/do my work for an hour.”
Another student who went back to West’s campus was freshman Madelyn Woodard: “My mom actually made the decision for me because she was worried about my mental health. I don’t know how much it’s helped, if at all, though.”
Unfortunately, many students’ mental health has taken a large hit due to the pandemic, with many reports fluctuating in specific numbers, but all indicating higher rates of anxiety now.
“It’s been kinda weird; I am a freshman who has never been on campus before this, so I am constantly lost,” she continued. “In some classes, I’m the only student in person, and a couple of times, the teacher was even absent,” Madelyn said.
There’s no one to interact with at school, so assignments are the unfortunate default for students who have opted for in-person learning. But since in-person student numbers are dwindling, WSFCS is planning to combine cohorts and have in-person students come back to campus for eight days a month, compared to the original four. This plan is set to commence sometime in April, but for now, students are still going back on a schedule of two days every two weeks.