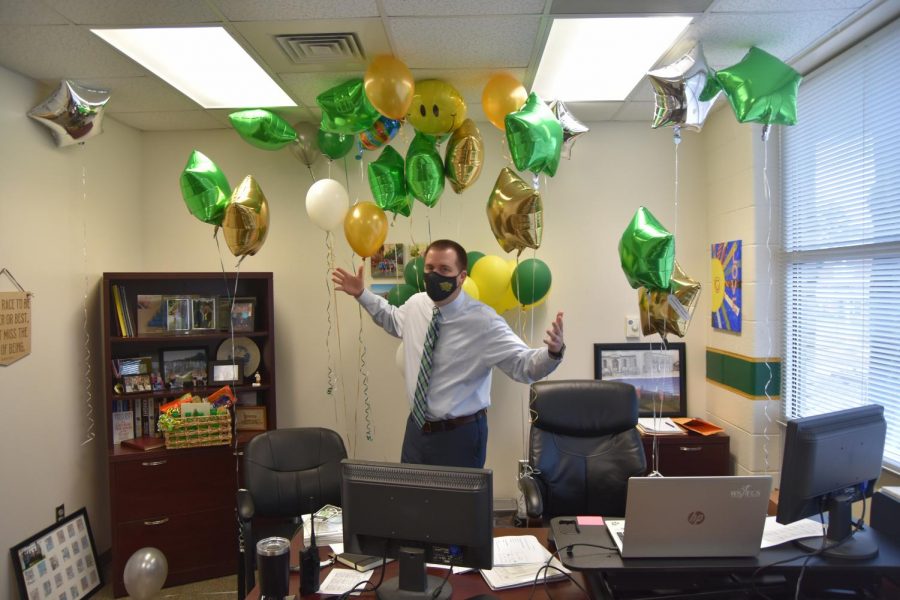 Principal Kevin Spainhour takes a moment in his new office after walking the campus on his first day. Teachers welcomed Spainhour with a plethora of balloons throughout the day.

As one door closes, another opens, and the main office doors are opening for Kevin Spainhour, the new principal of West Forsyth.
Spainhour is coming from West Stokes High School, which has an enrollment of 800 students, to the largest school in WS/FCS. Despite all the changes to face, he is excited for the new experience.
“I have always identified with leadership principles. I enjoy the challenge of bringing people together for a shared purpose. I see being a principal as the chance to ‘coach’ the entire school instead of a select few student-athletes,” Spainhour said.
Spainhour’s interview process occurred entirely over a series of Zoom calls, the first of which lasted three hours. Science teacher Jaclyn Showers and English teacher Stuart Egan were on the hiring committee and were impressed with his energy and dedication.
“Mr. Spainhour had an energy and passion for schools that is contagious, and his record as a high school principal was well-known. He was genuine, knowledgeable, engaging and showed a respect for West Forsyth that we hope can keep our school going forward,” Egan said.
They were also impressed with his plans for West.
“One of the things that stood out to me is that he believes he can make an impact here at West and leave a legacy. He believes that everyone needs to continue to grow and adapt,” Showers added.
Spainhour began his career as a teacher and coach after graduating from Guilford College. He went on to get his master’s degree from East Carolina University and his degree in administration from Appalachian State University. Spainhour has been the principal of West Stokes High School since 2013.
Although Spainhour has accepted the job, he has only ever been on campus to watch his daughter play volleyball in the Simpson Gym.
“It’s really weird to go buy a car and never sit in the car. I’ve never actually walked the campus. The only place I’ve ever really been [in] is the gym, so I’m hoping I can get there before March 1 and walk the grounds,” Spainhour said.
Despite the issues that learning through COVID-19 brings, Spainhour is still trying to find the positives.
“Our COVID learning situation brings many challenges in connecting and creating an upbeat atmosphere for students. However, for a brand new principal, having smaller numbers [of students] on campus each day may provide a better opportunity for student interactions and for me to learn the culture of our school,” Spainhour said.
Spainhour has tried to make school through COVID-19 as fun as possible.
“We’ve played music during class changes. In the cafeteria, we’ve done karaoke days. We’ve done trivia days. We did Christmas trivia on the days leading up to Christmas break, and [we gave] out milkshakes if you won the game. We’ve tried to do things even in the day-to-day setting that creates some reason to come to school,” Spainhour said.
He also plans on trying to make the rest of this year memorable for the class of 2021.
“I can guarantee you we’ll try everything we can to make it special because it does suck. Having a senior year that you guys have experienced, it stinks,” Spainhour said.
Spainhour’s perspective on education is the same as his outlook on life.
“‘Enjoy the journey’ is my life motto. Life takes you on many different journeys, and no two people have the same path. Much of education is finding your path and enjoying the process of reaching for success,” Spainhour said.
Spainhour is looking forward to being around his new students and getting to know them.
“I want to feel the energy of walking into a cafeteria with all of you guys. I love being around students… Out of the 800 students at West Stokes, I know the names of probably 770 of them. I don’t know that I’m [going to] be able to learn 2,400, but I’m [going to] know a lot of them,” Spainhour said.
Spainhour’s official start date is today, March 1, and students, staff and Spainhour himself are looking forward to the new chapter at West.

Fun Facts About Spainhour
Favorite musical artist: John Coltrane
Favorite movie: “The Karate Kid”
Favorite food: Milkshakes
Best memory from career: “When I left coaching at Mount Airy High School, many of my former players organized a golf event and poker night. It was great to reconnect and enjoy a day with guys I cared so deeply for over my coaching career.”