Will You Be Tailgating Next Fall? Football and other sports standouts at your future college 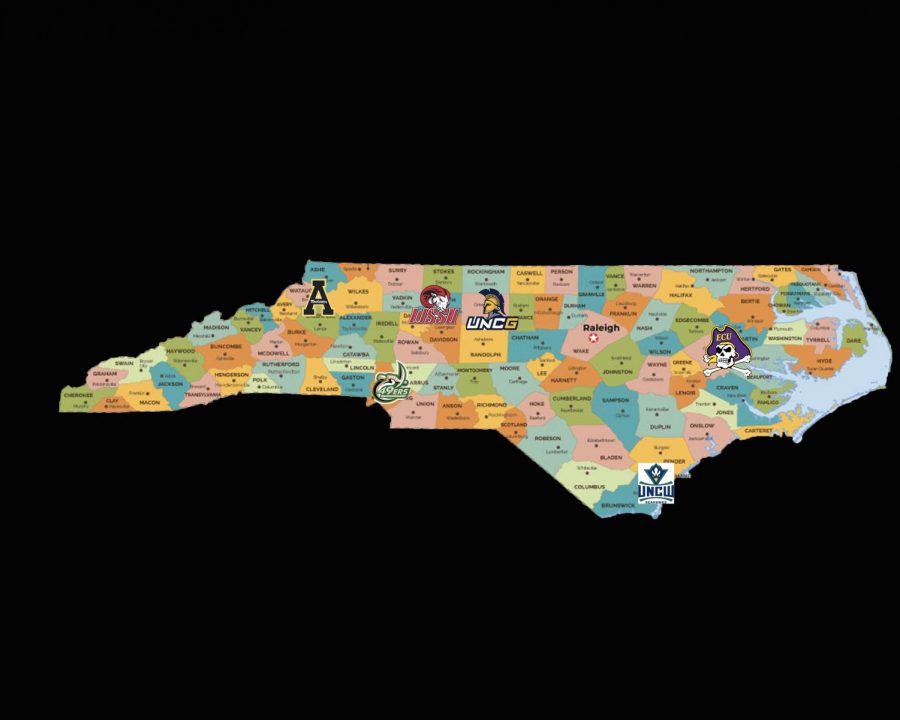 College admissions can be an overwhelming process, with countless aspects to consider. Unless aiming to be a collegiate athlete, many are so swamped with important decisions, that they completely forget about what sports their university may offer for the fans. Although sports teams are probably not the primary factor in your college choice, there’s no shame in considering it as part of your college experience. Sports are a key feature of college culture and a significant part of student life. While the spotlight is often on the ACC programs in the state (Duke, NC State, UNC, and Wake) there are other NC schools that offer great experiences for sports fans.

Appalachian State University
Undergraduates: 18,061
Student to Faculty Ratio: 16:1
Acceptance Rate: 68%
In-state Tuition: $7,249
Nickname: Mountaineers
Conference: Sun Belt
Sports Standouts: Appalachian State has the most successful football program in state history. They dominated the Southern Conference for 40 years, and successfully transitioned to Division I. Since their transition to the D-I Sun Belt Conference in 2014, the Mountaineer football team has won an impressive five bowl games and claimed four straight conference championships. They were the 18th ranked team in college football at one point last season. You will definitely be tailgating at App State.

East Carolina University
Undergraduates: 23,081
Student to Faculty Ratio: 18:1
Acceptance Rate: 70%
In-state Tuition: $7,068
Nickname: Pirates
Conference: American
Sports Standouts: East Carolina University has arguably the best game-day experience in the state, with a strong fan base and an atmosphere that rivals any local ACC school. Although they haven’t had a good football team for a few years, Pirate Nation has a reputation for passionate, rowdy fans. There is no doubt that you will have a blast tailgating at ECU.

University of North Carolina Charlotte
Undergraduates: 24,175
Student to Faculty Ratio: 19:1
Acceptance Rate: 66%
In-state Tuition: $6,905
Nickname: 49ers
Conference: Conference USA (C-USA)
Sports Standouts: The UNC Charlotte Football program started in 2014. After four losing seasons, the young program celebrated its first bowl appearance and bowl victory in 2019. The 49ers compete on campus, which contributes to the college experience. The 49ers take their tailgating seriously, as thousands of fans will show up to celebrate the festivities.

University of North Carolina Greensboro
Undergraduates: 16,641
Student to Faculty Ratio: 18:1
Acceptance Rate: 74%
In-state Tuition: $7,247
Nickname: Spartans
Conference: Southern
Sports Standouts: UNC Greensboro does not have a football team, but they do have good men’s and women’s soccer programs. The men’s basketball team has had great success over the past couple of years under former Tar Heel player Wes Miller, with NCAA and NIT tournament appearances the last three years. Though there are plenty of sports to watch other than football, if you’re really hankering for the party feel surrounding a college game, Wake Forest and Chapel Hill are each less than an hour away.

University of North Carolina Wilmington
Undergraduates: 14,785
Student to Faculty Ratio: 18:1
Acceptance rate: 72%
In-state Tuition: $7,076
Nickname: Seahawks
Conference: Colonial Athletic Association (CAA)
Sports Standouts: Although UNC Wilmington does not have a football team, Seahawk baseball has seven NCAA Tournament appearances, and basketball has six. Both men’s and women’s soccer have multiple NCAA Tournament appearances as well. You may not be tailgating for football, but you will have plenty of other opportunities to root for the Seahawks.

Winston Salem State University
Undergraduates: 4,741
Student to Faculty Ratio: 14-1
Acceptance rate: 65%
In-state Tuition: $5,941
Nickname: Rams
Conference: Mid-Eastern Athletic Conference (MEAC)
Sports Standouts: The Winston-Salem State football team was able to make it to the Division II National Championship football game in 2012. They lost, but were able to finish the season, 14-1. Although Division II, the Rams have the most wins and fewest losses of any team in the state over the past five years. Although undergraduate enrollment is considerably smaller than other schools, part-time and graduate enrollment contribute to a strong community following. Gameday at Bowman Gray Stadium takes a backseat to nobody, with a great band and exciting atmosphere.