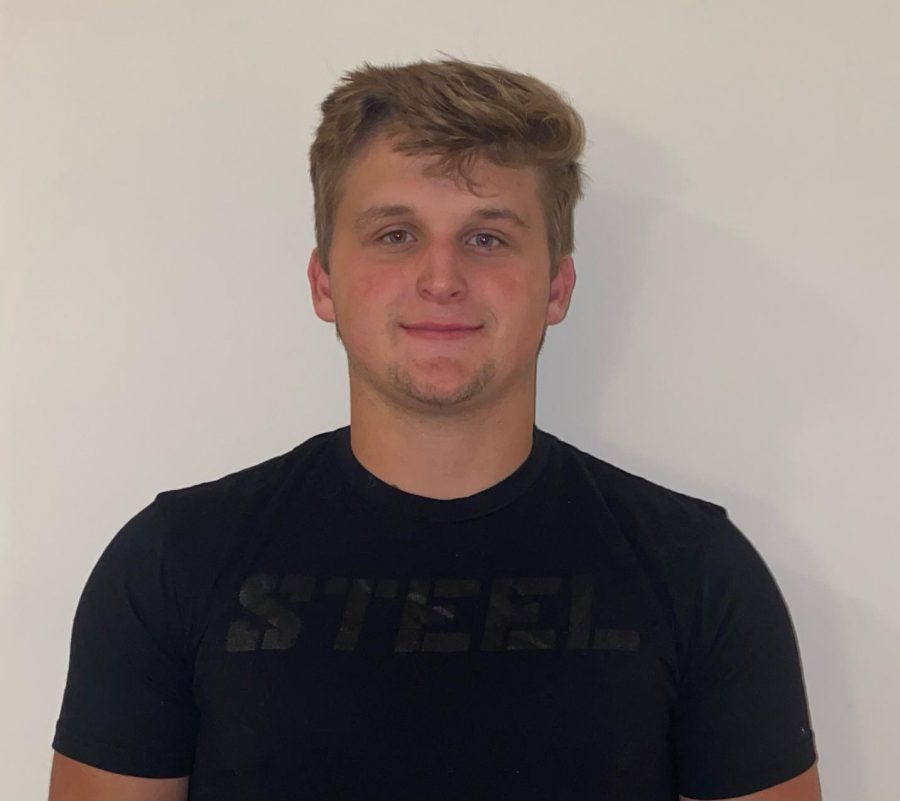 It would be an understatement to say baseball runs in the Cox family. The game has been beloved by the family for more than half a century. Bob Cox was a catcher and pitcher for the Carolina Tar heels from 1962-1964. Later, his son Chris Cox would hold down third and second base for the Heels from 1990-1993. Chris would mark his spot in the record books, hitting 49 home runs, placing him second all-time in Tar heel history; and would even go on to be drafted by the Atlanta Braves. Thirty years later, Chris’s son Banks, is now continuing the tradition of stand out ball players, dominating the diamond and soon to become the third generation of Division 1 baseball players after recently announcing his commitment to UNC Greensboro.
Banks has been a starter on the varsity baseball team since his freshman year. He started off as a designated hitter and played some infield. Over time however, he would develop into the textbook definition of a utility player but primarily pitch and catch like his grandfather. Like he did in high school, Banks plans on immediately making an impact at UNCG.
“As far as my goals for my freshman year, I want to make the starting lineup and immediately have a productive role on the team,” Cox said.
It was the opportunity and ability to make this instant impact that Banks was searching for in potential schools. Going to a university and waiting until he was an upperclassman to play was just not an option; not playing baseball simply isn’t in his DNA.
“We were really just looking for somewhere I can go and have an impact my freshman year, as well as a good relationship with the coaches. UNCG is giving me a good opportunity to play my freshman year and the coaches are amazing. Billy Godwin was a pro scout for many years, and Coach Greg Starbuck just came from Clemson,” Cox said.
Another driving factor in Banks’s decision is his value of family. Banks credits his father Chris, and grandfather Bob, with teaching him all he knows about the game.
“Every single thing I have learned or know about the game was through and because of them. My grandfather has always been a role model to me, he made me love baseball and showed me how to play the game right. Rarely ever misses a game. He is an absolute unit. My dad continues to help me develop my game daily and pushes me to be the best man and ball player I am capable of being,” Cox said.
So it’s no real shock that staying close enough to home where his family can come watch every home game is important to him.
Things weren’t always so glamorous for Banks though. The thrill and excitement of his newly announced commitment is only a byproduct of countless hours of hard work, injury, setbacks, and the refusal to give up on his dreams.
As a freshman, Banks already held multiple Division 1 scholarship offers from prestigious universities. However, those would be lost when an arm injury sidelined him for most of his sophomore season and all of his following summer season.
“It was just as mentally challenging as physically. I’d be lying if I said quitting didn’t cross my mind on numerous occasions. I hated not being able to play the game I’ve loved since I was just a kid,” Cox said.
Instead of quitting on his Division 1 dreams, Banks put his head down and worked. He would hit and throw three times during the week, lift weights daily to maintain strength, attend physical therapy for his arm and play sometimes up to five games on the weekends.
“My life was consumed by baseball, but I knew what it took to earn back those scholarships. It was exhausting but I just refused to quit,” Cox said.
Just when Banks was healthy again and back on track, looking forward to his junior season; COVID-19 struck.
“With COVID-19, Division 1 coaches couldn’t come to my games. I had to work twice as hard as the guy next to me. I have had many obstacles thrown my way and treated this just as another obstacle,” Cox said
Banks sent in videos weekly, and was slowly starting to get the looks of multiple Division 1 and Division 2 programs. Eventually, coaches just had a hard time passing up on the best defensive catcher in the state, mixed with jaw dropping generational power from the right side of the plate, topped with a 94 mile per hour fastball. UNCG, along with multiple other Division 1 programs, wanted Banks. His work had finally paid off.
But even after the scholarships and the accolades, it all comes back to one thing for Banks: family. Baseball is temporary, no matter how great you are; the best to ever step foot on a diamond are lucky to play past 40. However, the lifelong lessons taught and relationships built between the three men through the game is unbreakable. The long hours spent talking, playing and learning the ins and outs of the game will be things that will never fail to cross Banks’s mind. People often will say that if you talk to the three, they are all seemingly the same person; same face, same hair, same sense of humor, they even play the game the same way. The three of them have earned a reputation of genuinely some of the kindest, most respectful men you will ever meet.
Baseball isn’t going anywhere in the Cox family. There’s no doubt that 30 years from now, an article will be being written about the 4th generation of standout ball players in the Cox family. It’s safe to say that for years to come, the Cox family will continue powering home runs out of ballparks from the right side of the plate; because in the words of the “absolute unit” himself, Bob Cox: “Chicks dig the long ball.”