Trends of the 10s: Take a ride down memory lane 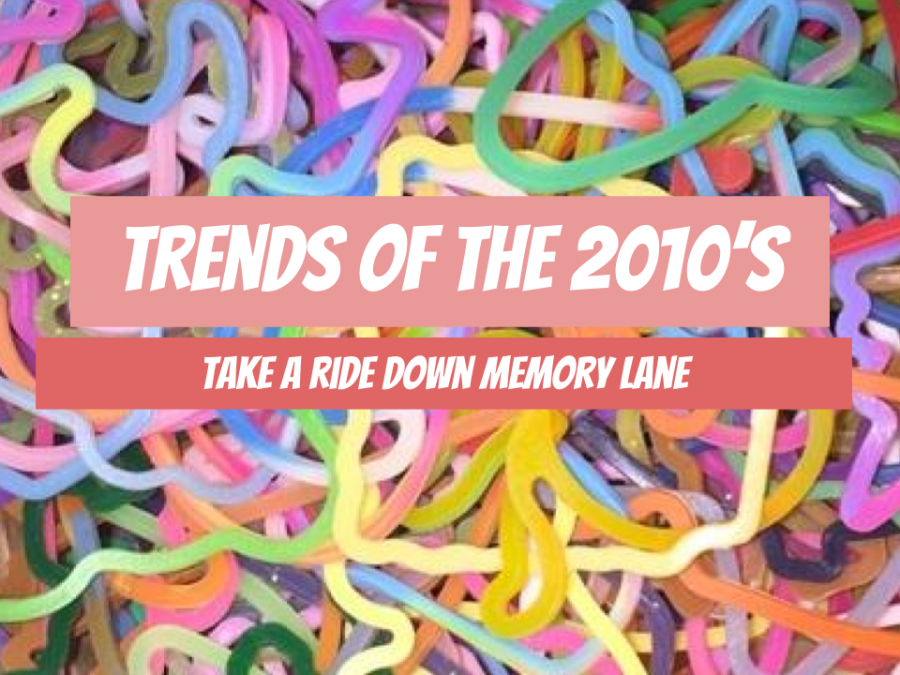 Sillybands were one of the many notable trends that emerged during the past decade.

With the new year quickly approaching, we aren’t just envisioning what 2020 will be but wondering what will come with this new decade. We’re also reminiscing on all the good times from these last 10 years. The 10s are ending and with it goes our childhood. It’s time to move on and discover new things, as Hannah Montana sang “I’m moving on, letting go, holding on to tomorrow/ I’ve always got the memories while I’m finding out who I’m gonna be.” But for now, as we have little time left in this decade, let’s hop in a time machine and take a ride down memory lane. In the words of Peter Pan, “Here we goooo!”
To start, let’s remember our favorite shows. Disney channel, especially the old Disney, will never be forgotten. Student favorites include:
“Wizards of Waverly Place, because I would watch it every day when I was young,” junior Gaby Ferrer said about the fantasy sitcom of three teens with magical powers.
“The Suite Life of Zack and Cody was my favorite,” sophomore Leslie Cuevas said.
Whether it was wizards, rock stars or goofy twins, Disney had it all. Even though Disney had the most hype, there were also other critical shows that must be included in this flash to the past.
“Victorious [is an important show from my childhood] because I watched it all the time,” junior Bailee Drum said.
“Spongebob, because it’s a great show and I used to always watch it,” freshman Eli Wylam said thinking back on viewing the friendly yellow sponge that works at the Krusty Krab.
“Phineas and Ferb because I binge watch it in the summer,” sophomore McKenna Singer said, recounting the times watching the cartoon characters and their genius attempts at making the most of their summer vacation.
Although the old television shows we used to spend hours on end watching are important to the 2010s, the trends we saw throughout this decade will really bring nostalgia. There were Silly Bandz, Justice clothing and Pillow Pets, as well as Rainbow Loom, Webkinz, Heelys and so many more.
“[I remember the trend of] Fidget Spinners, because everyone had one,” freshman Maddie Scheier recalled.
“Silly Bandz, because it was part of my childhood,” sophomore Breanna Castaneda said, thinking back to the good days when wearing a hundred little colorful bands across your wrists was the coolest thing ever.
“Beyblade, because I used to play it when I was little,” senior Drew Myers said remembering playing with the spinning tops for hours on end in his younger years.
“Fortnite, because it allowed me to get closer with all my friends,” senior Ciiron McThay said with a smile.
“Minecraft, because that was my whole childhood,” sophomore Jason Bevel said.
“Flappy Bird is a game that I will never forget,” sophomore Kate Saalweachter exclaimed because although the game was frustrating, it will be remembered for many years to come.
“Vine,” senior Aidan Peache lamented, remembering the countless six-second videos.
Trends, television shows, songs and other trends might bring back all those 2010 memories. Whether you are sad the decade is ending, excited for the next, or a little of both, we all have something that reminds us of the 10s. One day we will tell stories about the fun that this last decade has brought. But for today, “Good Luck Charlie”.